The Wealth of Nations Index and Poland’s position: a state in the middle of a pandemic

Measuring the wealth of societies is considered the Holy Grail of economics. The idea of representing the level of wealth using a single quantity sounds extremely appealing. Ideally, this quantity should allow for both international comparisons and comparisons over time. We would like to know how much better (or worse) we live compared to our parents’ generation or compared to our neighbors; to do this, it would be convenient to put just two numbers together.

Unfortunately, the reality turns out to be disappointing in this regard. Not only has no one yet come up with a suitable method of measurement. We might have hoped that some economic genius would eventually devise the right indicator. But we know that will never happen. The problem is that the very task we set ourselves of dreaming up a method of measurement is impossible, as all the better economists know. After all, economics studies not material goods but the process of satisfying human preferences, and these are subjective, intense, and impossible to aggregate.

And yet, despite these obvious reservations, people continue to construct methods to compare the wealth of societies. We have done this at the Warsaw Enterprise Institute as well. We are aware that our Wealth of Nations Index is conventional, full of simplifications, analytical compromises and sheer artificiality. However, this is also true of other similar measures. The awareness of imperfection of some of them (e.g. the one still most commonly used – GDP per capita) results in attempts to build new ones, which themselves turn out to be highly imperfect. Therefore, we do not claim that WNI is better than existing indicators. It is simply different – it shows economic reality in a yet untried way.

The second edition of the Wealth of Nations Index has been expanded to include the OECD countries – so it includes all EU and non-EU OECD countries. More importantly, this year’s edition brought significant changes to both the index itself and the prevailing global economic conditions. Last year, we measured the flow of economic benefits per citizen as of early 2020 – i.e. before the sars-cov2 outbreak. This year’s edition takes us to the end of the first year of the pandemic. It describes the reality in the midst of the economic and social crisis that the world finds itself in due to the disease itself and the countermeasures taken by governments and private actors.

The pandemic has forced some adjustments in the methodology for calculating the WNI. Some of the measures used to calculate the subcategories of the public expenditure quality index, which is one of the two pillars of the WNI, were suspended or discontinued due to the epidemic – the corresponding indices for 2021 were simply not published. For this reason, we had to replace them with other measures, which resulted in a per balance expansion of the database from which the public expenditure quality index is derived. By the way, in addition to last year’s seven dimensions by which we evaluated public spending, this year we added an eighth – freedom of speech and association. As a result, the WNI for the previous year is not an exact methodological copy of the current edition. The differences are not colossal, however, and above all both are motivated by the same idea – hence we allow ourselves, despite the above reservations, to compare the WNI indicators year by year. This comparison gives a snapshot of the changes that have taken place in the welfare of EU countries and the UK in the twelve months since the outbreak.

All but Poland and Ireland have lost out

What is immediately striking is the decline in the WNI of almost all countries whose results were calculated in this year’s and last year’s editions. The two exceptions are Poland and Ireland, although the latter is an exceptional country in our comparison due to the structure of Irish GDP, bloated thanks to the depreciation of assets transferred to this country for tax reasons by multinational companies. Poland this year scored 61 points – 0.8 more than last year (1.3% y/y growth). This is thanks to the still unabated stream of spending in the private economy and a slight increase in the rating for public spending (from 58.8 to 61.2 points), the importance of which has increased during the epidemic. On the other hand, the highest declines in absolute numbers were recorded in Spain (-7.6), the United Kingdom (-6.7) and Austria (-6.4); in relative numbers, in Spain (-10%), Greece (-9.8%), the United Kingdom (-7.9%) and Croatia (-7.8%). The case of Spain is interesting in that its performance is almost exclusively due to the dramatic crisis in the private economy, while its indicator of the quality of public spending remained close to last year’s level (similar to Italy or Portugal). In principle, however, both components of the WNI are responsible for the declines: we have seen a crisis in private spending and a simultaneous decline in the quality of public spending, with the former dominating as the cause of the lower WNI results this year compared to last. 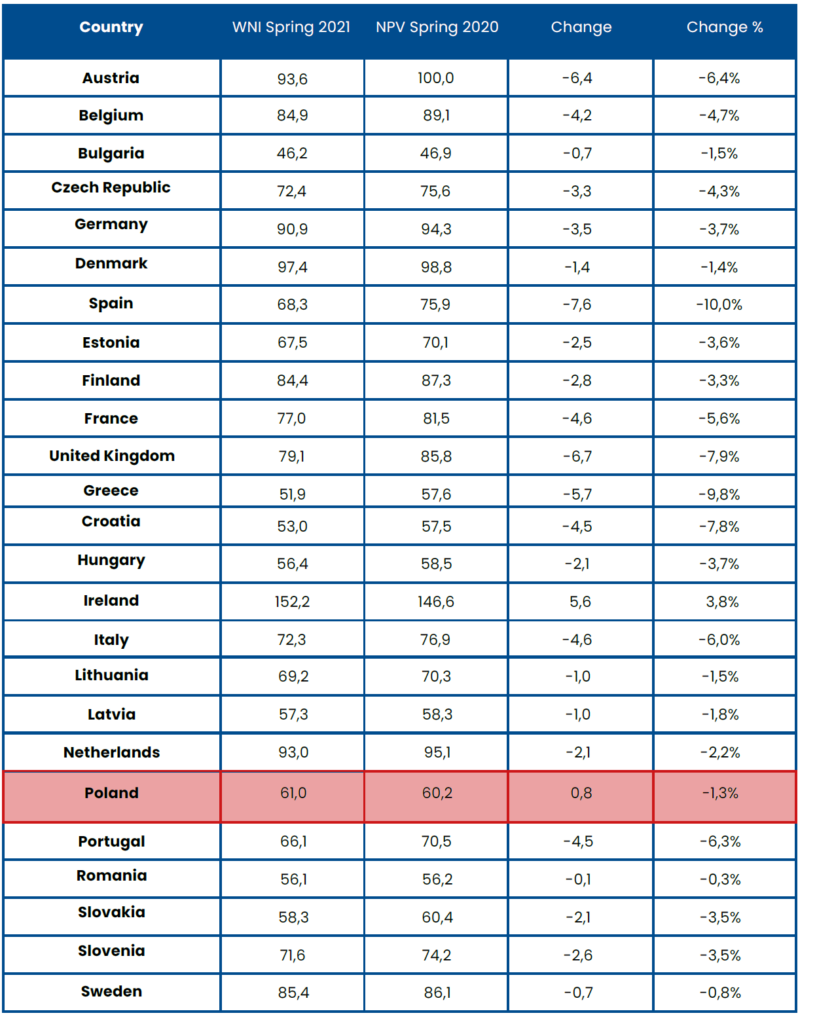 In the EU, Denmark ahead of Austria and the Netherlands – Poland 17th.

The highest WBN score in the EU plus UK group was Ireland, but for reasons noted above we will omit it from the ranking. With this exclusion, this year’s WBN ranking in the EU is opened by Denmark (97.4 points), ahead of Austria. Thus, the top two countries swapped places relative to their positions in the ranking a year ago. The Netherlands (93) and Germany (90.9) have retained their positions, while Sweden has moved up two places to fifth with 85.4 points.

Poland has moved up one notch to 17th place. In the Central European region Poland’s score (61 points) places it in the middle. Poland leads the group of countries, which scored between 53 and 61 points – there are also Croatia (53), Romania (56.1), Hungary (56.4), Latvia (57.3) and Slovakia (58.3). Poland is still far behind the countries with the highest WNI scores in the region: Estonia (67.5), Slovenia (71.6) and the Czech Republic (72.4). It is worth noting that some Western European countries seem possible to catch up with in a few years’ time, provided that the current pace of Poland’s economic development is maintained. Portugal with the result of 66.1 points or Spain, which scored 68.3 points, are good benchmarks for Poland in the nearest future. Greece, which Poland was also ahead of in the previous edition of the WBN, has seen a deep decline – its score is now only 51.9 points, clearly behind almost all the countries of Central Europe.

Group of OECD countries makes its debut in the WBN

OECD countries that have never belonged to the European Union have been added to this year’s edition of WBN. The group is very heterogeneous: it includes the richest countries such as Switzerland and the United States as well as, for example, Colombia and Mexico (the score was not calculated for Iceland and Costa Rica due to lack of data). If we exclude Ireland again, it turns out that Switzerland and the USA obtained the highest score in the expanded group. The Swiss, with a score of 126 points, significantly outstrip not only all European Union countries, but also the Americans (105.7 points and second position). The result of the USA is characterised by a very high share of the private sector and a relatively low quality of public spending (66.5 points on the quality index for public spending – a result at the level of Slovakia, Lithuania or Latvia). Switzerland, meanwhile, is slightly ahead of the U.S. in terms of private economy per capita, but – unlike the U.S. – the quality of its public spending is also enviable, contributing very significantly to such a clear distance from America. With a score of 87.2 on the quality index for public spending, Switzerland was in this respect slightly outpaced only by Denmark (88.4) and Finland (87.6), while it outdistanced model social democracies such as Norway (83.3) and Sweden (79.9).

At the opposite extreme were Colombia and Mexico. Both countries lagged behind in the category of the size of the private economy per capita, and also received low scores on the quality of public spending index.

The amount of spending is closely related to its quality

For the second time it also turned out that the quality of public spending strongly depends on its per capita level. In other words, there is no way around it – those who want good services provided by the state have to reckon with quite high expenditures on these services. The relationship between the index of public expenditures and their per capita level is graphically illustrated in the chart below.

Countries that fall below the dashed line of best fit can be said to spend public funds better than they should in their fiscal situation. Those whose scores lie above it – the opposite. Poland is marked in red – its score is slightly below the line, which indicates that – given the size of public spending in Poland – the government and local governments spend money with average efficiency.

A new category introduced to the WNI this year is the eighth, by which we evaluate the quality of public spending – freedom of speech and assembly. Several regularities can be observed in this statistic. What is immediately noticeable is that almost all countries scored above 70 points in this category, or very close to it (Hungary with 69.7 points would close the group, followed by Mexico – 74.4 points). An exception in comparison to the rest is Turkey, closing the classification with only 41.5 points. Moreover, it can also be seen that the results of the conventionally called Western countries (Western Europe, the United States, Canada, Australia, Japan) oscillate around 90 points or exceed this figure. On the other hand, in the group of results between 70 and 80 are already mentioned Mexico, Israel (75.4), Colombia (76.7) and Poland (78.3).

It is worth mentioning that the category of freedom of speech and assembly positively correlates with the full index of the quality of public spending, both in the full group and after removing the outlier Turkey from it. Only a moderately strong positive correlation can also be observed between this category and private spending per citizen, although in this case removing Turkey weakens the relationship even more.

Before the next edition of the WNI

As mentioned at the beginning, the just published edition of the WNI presents the state at the middle of the pandemic period. It appears that the edition of the CBN planned for next year will be able to answer the question of what condition all the countries surveyed have emerged from the sars-cov19 epidemic crisis. It is possible that in some cases the losses seen in the current survey will have deepened, while in others the process of economic and social recovery will be far advanced. Unfortunately, further threats to the global economy and security are on the doorstep – time will tell how these will be reflected in future editions of the WNI.