The Wealth of Nations Index measures the stream of economic benefits per citizen per year in the European Union and OECD countries. The best-known international comparative measure of well-being, gross domestic product (GDP) per capita, works on a similar principle. The difference between the two lies in the approach to public spending. GDP treats spending on final goods equally, regardless of its source. In its calculation, one zloty spent by a private individual is equivalent to one zloty spent by the public sector. Thus, it does not matter whether the allocation of resources is decided by the government or by citizens. The approach used in the construction of the WNI is different. Private spending is calculated in the same way as GDP. Government spending, on the other hand, is evaluated in terms of its effects rather than its monetary value. The evaluation of a zloty spent by the government depends on how good the public services are for which it was spent.

Private spending should be understood as that part of the economy in which the allocation of resources is determined by private entities (citizens, companies, etc.). To measure it, total GDP must be reduced by public spending that is not a transfer (transfers are public spending that transfers purchasing power from one group of citizens to another, so the allocation of resources is ultimately determined by citizens). In other words, private spending is GDP minus government consumption spending and government investment.

According to the so-called principle of revealed preference, the construction of the WNI assumes that private spending is optimal. Optimality here means that every zloty spent by citizens satisfies their needs to the greatest extent possible. For this reason, private expenditures are included in the WNI in proportion to their per capita size. They are then adjusted for differences in purchasing power between countries. This procedure makes such expenditures more realistic by taking into account differences in the level of prices between countries. In “expensive” countries, i.e., those with a high cost of living, one zloty of private expenditure can purchase fewer goods and services than in “cheap” countries. In short, the amount of private spending per capita adjusted for purchasing power is a measure of the real economic benefits derived from citizens’ allocative decisions in the economy.

Public expenditures are understood here as government expenditures in a sense similar to national accounts. It includes government consumption expenditures (i.e., on final goods and services for citizens) and government investment. The WNI measures the benefits of public spending by using a special sub-indicator of the quality of public spending. It assesses the quality of public services in seven areas that correspond loosely to the key categories of the OECD’s Classification of Functions of Government (COFOG). It also adds an eighth category to these: freedom of speech and assembly – which is also assessed under the sub-indicator. Country scores in each of the eight areas were calculated by aggregating existing indicators or measures of quality for each area, sometimes after pre-processing the inputs. A full list of the eight areas, along with the measures used to assess them, is provided below. 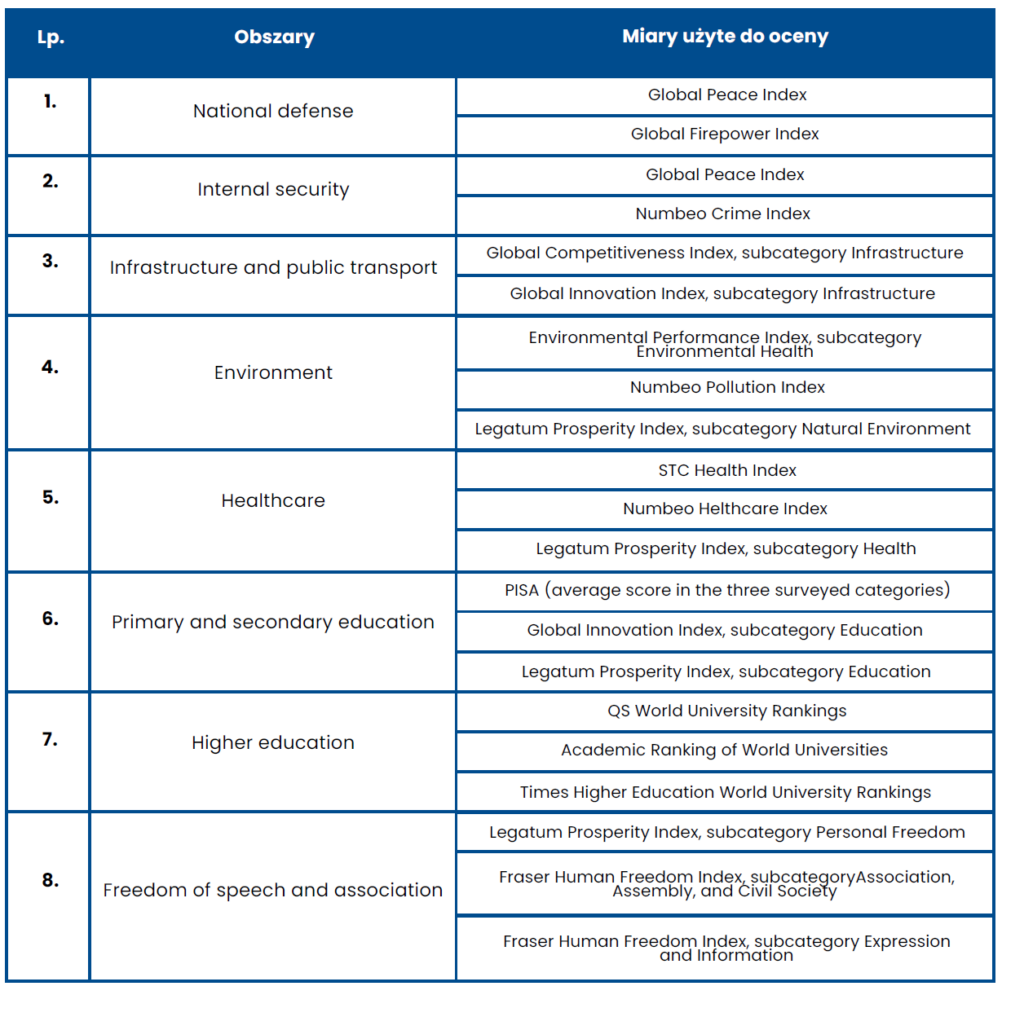 Scores in each area were aggregated to produce a public expenditure quality index taking values between 0 and 100. Because some measures are not calculated for the smallest countries, the WNI excludes Cyprus, Luxembourg, Malta, Iceland, and Costa Rica.

he value of the WNI is the sum of the public expenditure component and the private expenditure component. The first is directly proportional to private expenditure per capita adjusted for purchasing power. The second is proportional to the product of average public spending in the European Union and the quality indicator for public spending described above. This second component is further multiplied by a factor called the public expenditure bonus. In order to obtain a more appropriate assessment of the importance of public spending and also to avoid a pro-liberal bias of the WNI, the contribution of public spending to the index is multiplied by a factor (1 + bonus). It raises the potential value of public spending relative to the value of private spending. This means that a zloty spent by the government in a perfect way (i.e. in such a way that the quality indicator of public spending takes the maximum value for it) is included in the WNI as (1 + bonus) zloty (e.g. for the bonus value suggested by WEI, i.e. 50 percent, it will be 1 zloty 50 groszy). This solution corresponds to the optimistic assumption that governments spend money in areas of the economy where the market regime would yield worse results than the allocation of resources by the state. Most importantly, regardless of the interpretation, the described move gives an advantage to the public sector, although it may squander it by providing low-quality public services to citizens.

To summarise, the Wealth of Nations Index is thus calculated as:

Warsaw Enterprise Institute (WEI) provides users with the ability to customise the Wealth of Nations Index to their preferences. The parameters of WNI recommended by WEI can be changed using an online tool. This applies to both the weight of each of the seven public spending areas as well as the size of the public spending bonus.